Kennedy Space Center is something you must see. If you are in Florida or if you make a special trip just to see it, you will probably stay for at least two days. Also visit Huntsville where the Space Camp is located. We were there three years ago and it is also a great place to see. I always want to stay longer at Kennedy so we have annual passes so we will visit several times while we are here for the winter. We were there two years ago for our first visit.

After taking tours of the old launch sites and seeing what they created in the early 1960's, I realized that I should have worked there. Lot's of tube type electronics back in the 1960's and I still remember how to work on tube equipment. I wish I had known more about it after high school because I may have ended up there. The equipment they built 58 years ago is amazing. It is the most interesting place I have every visited.

Here are a few of the many photos from our visit on January 28th, the day after the Grissom Memorial. My next post will be from January 29th and Space Shuttle Atlantis. 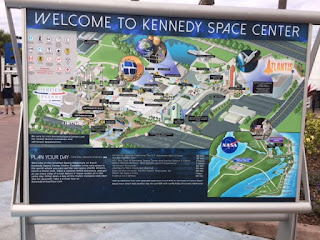